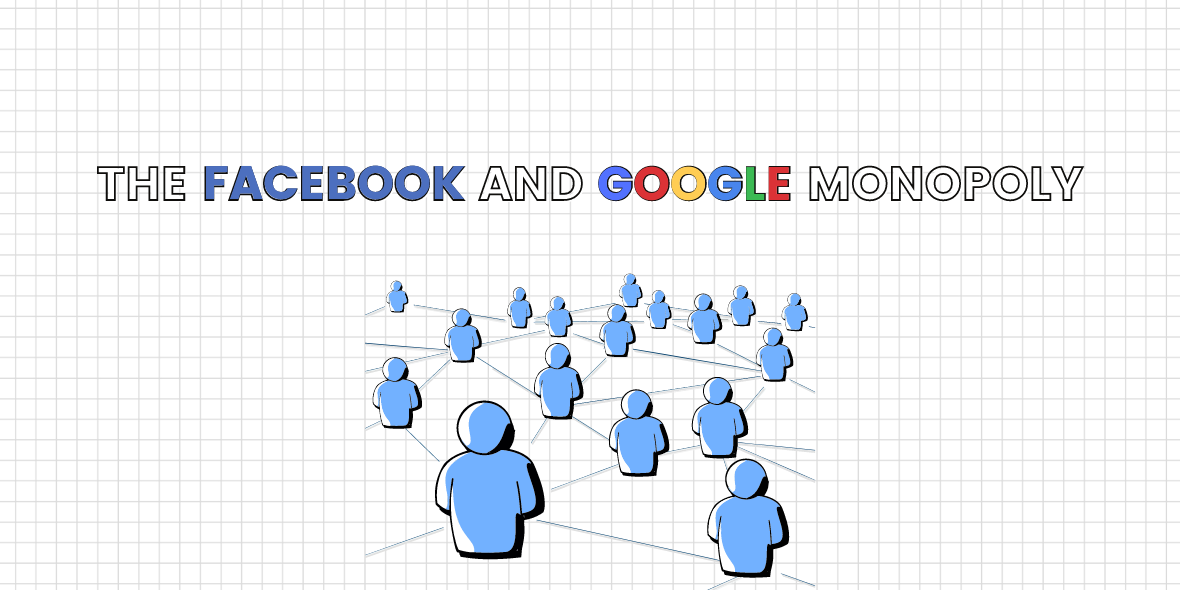 Now that you are ready to take the next step – launch your business online. Great! Let’s get started. Primarily, you’ll require a website and inventory to create an online retail business. Promptly, you’ll need customers. Customers are out there, admittedly, somewhere on the internet.

The predicament in recent years is that Internet Giant, Google has acquired several advertising businesses. Google now controls not merely the search of websites online but also most of the advertising associated with an online search.

Sounds like a Google Monopoly to you? Let’s see.

One may ask, where does Facebook fit into the monopoly market? As per the numerous lawsuits filed by the attorney generals of several states reported by The Wall Street Journal, there exists an agreement code named Jedi Blue, formulated by Google for colluding with Social Media giant, Facebook to possess a monopoly over the internet.

Before the ‘dot com’ bubble, while typically advertising from newspapers manufactured from dead trees, contributed about 80% of revenue. Since advertisements started shifting online, the returns started decimating. Predominantly, Craigslist, an online, mostly free advertisement display service that shoveled up nearly all the classified ads, eventually accompanied both Google and Facebook.

What does that lead to?

The New York Times, The Washington Post, The Wall Street Journal, and John Henry’s Boston Globe are already en route to reinventing themselves as flourishing businesses by diminishing their dependence on print advertisements in an inclination to digital-based subscriptions. Paid search is not the only entity that drains a retail marketer’s marketing budget and resources.

Digital retailers may additionally hold a dedicated team of employees who push their brands to crucial positions by natural or organic search results through a practice, commonly referred to as search engine optimization (SEO). As a vast majority of the search activity occurs in Google, SEO usually translates to optimizing the Google search engine.

Google’s search results algorithm is broadly composed of a black box to outsiders. Generally, organic marketers find it quite difficult to navigate their respective placements in the search. When asked if online retailers could benefit from more competition in search, Frank Buytendijk, Distinguished VP Analyst from Gartner said, “It’s more a matter of transparency than diversity.”  Yet Google search algorithm is still in a predicament there in some respects.

While, to the other end of the spectrum, social media sponsored ads promptly resemble organic content in terms of aesthetic and visual appeal. Social media users typically do not skip over these advertisements at first glance. Researches in the past have also shown how sponsored content on social media pages that resemble user-generated content tends to garner more attention from targeted users.  Sponsored posts that resemble organic ones are one of the most successful practices opted by digital advertising companies.

Google Search result pages aren’t the only way retailers rely on Google for their online marketing. Internet Giant, Google additionally operates a $21.5 billion a year third-party advertising business through some of their subsidiaries like AdMob, AdSense, and Google Ad Manager services.

Besides, with Google’s abundance of user data, Google can cater to digital advertisements tailored to each consumer’s specification. These advertisements target individuals based on their views on websites throughout the internet, including influential media houses like The New York Times and USA Today’s websites.

Does this mean we can speak of a Google monopoly?

This question can’t be answered that simply. Some say we can speak of a Google monopoly, others say we can’t. Technically speaking a monopoly refers to the exclusive possession of something, a product, or a service. Although Google and also Facebook do dominate when it comes to digital advertising and online search, neither of them accounts for 100% of digital advertising.

This is a debate that will probably go on for the next couple of years, especially as both platforms are expanding their dominance.

To this date, Google and Facebook preserve the most widespread market share of sponsored content over the internet. A majority of small businesses experience a positive ROI of $3 for every $1.60 spent on Google AdWords. Google monopoly or not, most online marketing specialists are dependent on the Google-Facebook duo and their respective platforms for their business. While these platforms consume a good chunk of an entire online investment. It’s reasonably also worth noting that Facebook emerged relatively unharmed by the boycott as stated by Facebook’s CFO in July 2020, “when the majority of the boycott took place, tech giant Facebook’s ad revenue grew by 10%.”

Despite the numerous differences amongst the online and offline advertising channels, they have their advantages and challenges. The key here lies in developing a plan of action and distributing your budget across various channels of offline and online advertising.

Want to know more about how you can successfully market a business without the hassle of thinking over how to market? At Nanos, we are happy to help you with your marketing campaign. Contact us or book a free consultation!

Choosing The Right Audience For Your Ad With Nanos
September 9, 2021

AI In Marketing: Understanding The AI Behind Nanos
August 20, 2021